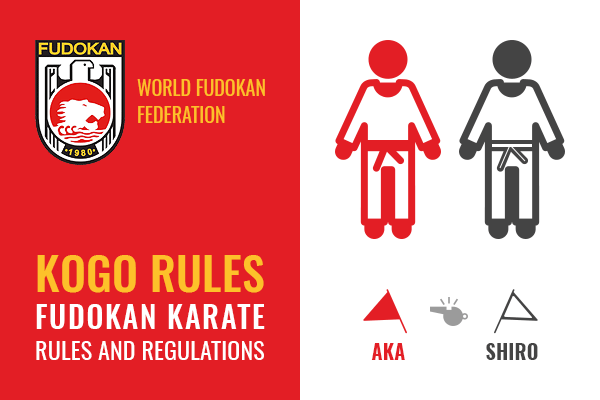 Ko-go Kumite is a specific form of Kumite competition which designates competitors as either Offense or Defense at the start of each match.

Each match is completely independent. Penalty is not carried over to the next match.

In cases of "Han-soku", "Shi-kkaku", Doctor's Stop or Withdraw, no more matches take place. Opponent is declared the winner.

In case of a tie (when the points are equal), then the "Kettei-sen" match takes place in which each competitor attacks and defends three times, but this time, alternately initiating the attack, beginning with Aka (Red) side. In case one side scores "Waza-ari" or "Ippon", then that side is declared winner. If no "Waza-ari" or "Ippon", then total score determines winner. If score is still tied, then the court judges decide on the winner by Tsu-mae decision.

Shu-shin first announces "Offense" side by showing with left hand to the athlete’s left side position Aka, pronouncing orally Aka, Ko-geki, Ikkai. Hands movement: left hand is fully stretched toward Aka in the level of chest, and after that, banding in the elbow joint initial position which is parallel to the floor. After that, fully stretched with the finger in upright position showing the first attack (Ikkai). This is repeating with two fingers for the second attack (Ni-kai) and after that, the third time, three fingers for the third attack (San-kai).

These commands are performing in one smooth movement of hand.

In addition to General Kumite Rules, penalty points are given to the opponent for violations in the following cases:

In case of violation of general Kumite Rules, other than the Ko-go Kumite Rules, Shu-shin gives the penalty after confirming with the court judges, without any informal verbal warning.