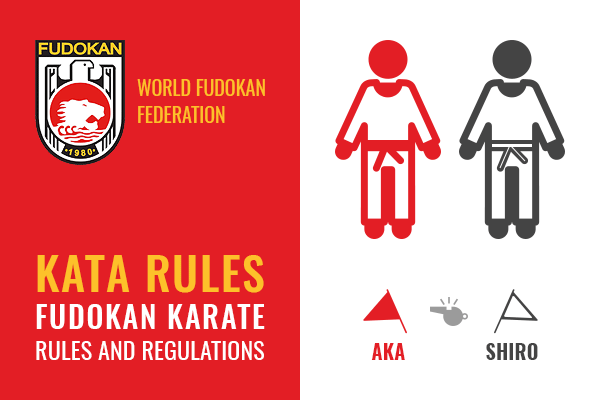 Recognizing the fundamental principle of Funakoshi Gichin’s kata definition (from his first book from 1922) - that kata is a set of karate principles, Fudokan kata rulebook and the whole competition system is based on his idea.

Kata (form) competition
Kata Competition demonstrates Fudokan Karate Kata through individual and team presentations. The Synchronized Team category demonstrates both Kata and its application (Bun-kai). Order of winners is determined by point scoring or flag scoring; the higher the score, the higher the winner's placement.

Kata Competition is divided into the following categories:

Competition area
The competition area shall be sixty four square meters. The competitor shall perform the Kata facing the main seating area in one of two positions, which are located 2 meters in front of and in back of the exact center of the competition area. The surface of the floor must be flat and neither too smooth as to be slippery nor too rough as to inhibit proper execution. The conditions shall be the same as those set forth under the Kumite Rules. The positions of the Judges and Court Clerks shall be those set forth by Appendix II.

Type of kata
Competitors shall be required to select Katas from the following Fudokan and Shotokan list, although exceptions will be allowed in the case of different style Katas having the same origins but whose name pronunciations are different.

Scoring
At elimination time, the scoring shall be determined on the basis of the viewpoint of Judges according to the formula of Basic Points minus Penalty Points.

At final match time (except Synchronized Kata Application), the scoring formula shall be Basic Points plus Skill Points minus Penalty Points.

Final matches of Synchronized Kata competition: Scoring is derived from scores of Kata (3 person) and Application of the same Kata.

A. Basic Points are arrived at from four factors:

B. Skill Points are arrived at from:

D. Penalty Points shall be deducted in the following instances:

The Judges must meet at least twenty-four hours prior to the tournament in order to ensure scoring uniformity and consistency through review of at least three model matches. If Judges are unable to meet prior to the tournament, they may ensure scoring uniformity by together reviewing scores of first match of the competition (before assigning final score).

The demonstration shall be immediately stopped (Doctor’s Stop) whenever there is a Medical Decision that a danger of injury or illness exists to the competitor. In the case of Doctor’s Stop, no scoring shall take place.

A. The Tournament Organizing Committee must select the following Court Clerks:

B. The Court Clerks shall perform their duties under the direction of the respective Court Shu-shin.

Selection and Registration of the Kata

Changes in the Team Composition

The members of each Synchronized Kata team must remain the same throughout the elimination. Members may not be added or dropped from a team. However, the demonstration positions are permitted to change.

The operation of the competition shall be in accordance with the following order:

All Judges must follow the required dress code set by the Technical Committee.

Delegation of Authority by the Chief Judge

The Chief Judge is empowered to delegate authority to the Assistant Chief Judge(s) assigned to a separate court.

Rights and Responsibilities of the Shu-shin

If deemed necessary to fulfill these purposes, the Shu-shin may direct the Court Clerks, competitor(s), and Judge(s) toward the attainment of these optimum conditions.

When Shu-shin calls meeting, Court Judges assemble in front of the Shu-shin's chair.

At the Court Judges meeting, each Court Judge including the Shu-shin, shall have an equal voting right. In the case of tie vote, the Shu-shin shall make the final decision.

In the case of injury or illness during the competition, the Shu-shin must do the following:

The Announcer shall read aloud the Scoring Boards beginning with the Shu-shin and then proceeding clockwise with each Judge. As each board is read, the corresponding Judge's country shall then be announced. After all the scoring has been announced, the Recorder shall then add all the individual scores and give the total to the Announcer who shall then announce the average score.

After a Kettei-sen is completed, all Court Judges bring in their scoring forms and discuss the results to determine first the ranking order. The Shu-shin collects all Scoring Forms, indicate their decision to the Recorder.

Requirement for Notice of Scores

The scores given to each competitor (team) must be clearly posted so that they are visible to all persons in the tournament area.

In case of a Kettei-sen, scores are not announced, only the relative order (1st, 2nd, 3rd) beginning with the highest score.