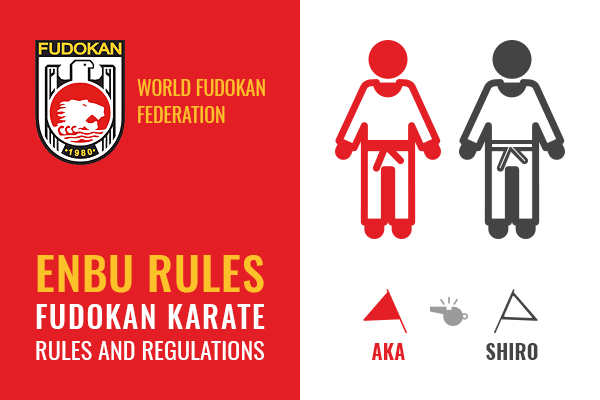 Mandatory En-bu is presented every second year on World Championship by Technical committee.

B. Basic Points are arrived at from four factors:

D. Penalty Points shall be deducted in the following instances:

(1) Omission of required technique
(2) Either too much or too little time relative to time requirement for demonstration
(3) Hesitation or break in demonstration.
(4) No Todome to complete demonstration as required
(5) Offense technique completely misdirected at opponent
(6) Missing target during Todome
(7) Mistake in defense (missed block, etc.)
(8) Light or Moderate Contact
Remark: See Kumite Rules for contact definitions. All decisions regarding level of contact made by Medical Judge.
(9)   Using finger attack to the eyes
(10) Unnecessary grabbing or clinching by defense
(11) Starting offensive attack by woman other than counter-attack or feint (fake)
(12) Man using Todome in mixed divisions against woman
(13) Forgetting to bow to Shu-shin (Referee) and opponent at either beginning or end of demonstration
(14) Either competitor moving out of competition area results in Jo-gai (any part of athlete’s body going out of Competition Area)
(15) After completion of En-bu, when competitors bow to Shu-shin they are in an incorrect position and/or face incorrect direction (from original) 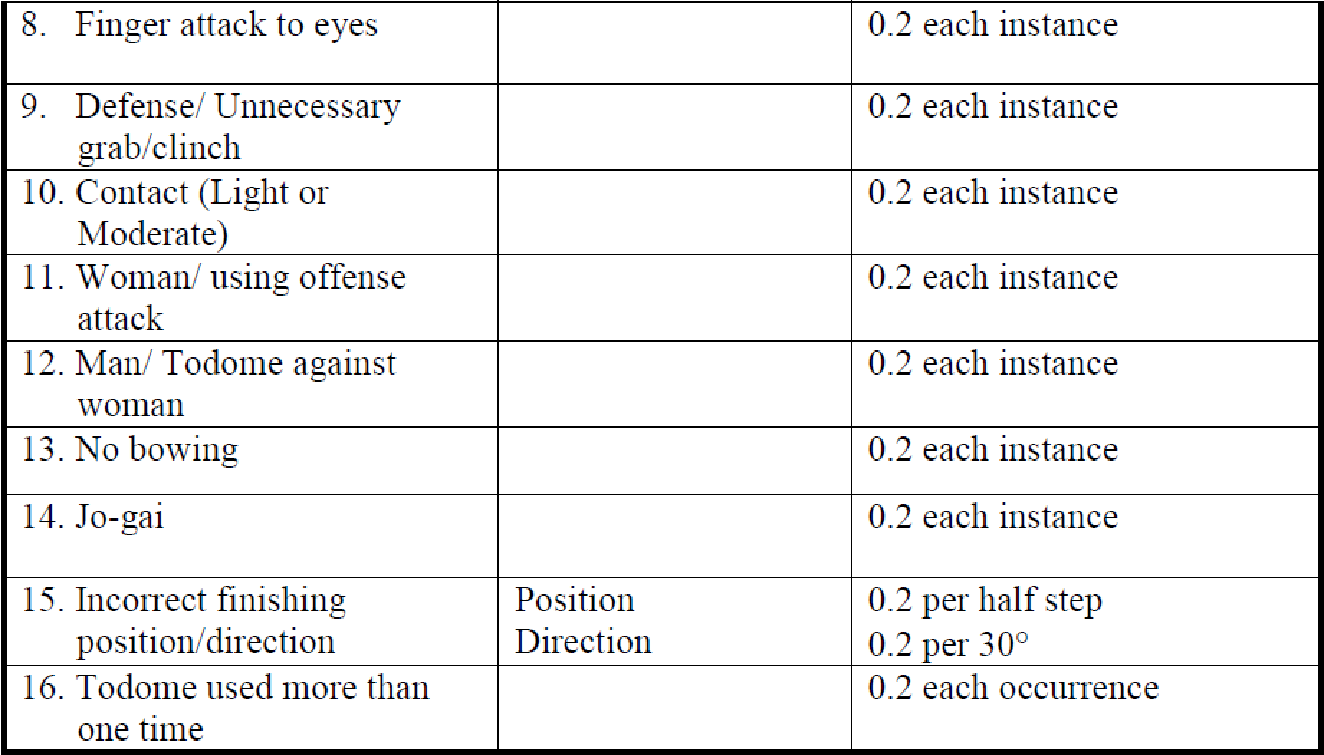 A. Apply Kata Rules which refer to teams.
B. In case of a Kettei-sen, competitors may perform same or different choreography than original.

The operation of the competition shall be in accordance with the following order:

A. Opening Ceremony
B. Competition

(1) Competitors take starting positions, then bow to Shu-shin and each other, then begin demonstration. Competitors may bow from standing position or Sei-za position.
(2) After demonstration, competitors return to original position, bow to each other, then bow to Shu-shin and withdraw from the Competition Area when ordered to by Shu-shin.
Remark: Competitors who begin with standing bow must end with standing bow. Competitors who begin with floor sitting bow must end with floor sitting bow. A competitor who begins with standing bow and ends with floor sitting bow (or vice versa) will receive a “no bowing” penalty.
(3) Timer reports to Shu-shin the length of the demonstration as to over or under time limit.
(4) Shu-shin confirms penalty point, and if penalty confirmed, calls Court Judges meeting to decide penalty points. (Procedures – see Kata rules).
(5) After penalty is confirmed, then the Court Judges shall complete their Scoring Forms
(6) The Recorder shall collect the scoring forms from each Court Judge
(7) Shu-shin shall then request their presentation of the scores by blowing one long whistle followed by one short, sharp whistle. The Court Judges shall each present their scoring by holding their own Scoring Boards overhead.
(8) The Announcer shall read each score aloud starting with the Shushin and proceeding clockwise. If a score is misread, the Shu-shin shall request a correction from the Announcer. To direct the Court Judges to lower their Scoring Boards after they have been read correctly by the Announcer, the Shu-shin shall blow one, short whistle.
(9)  The Announcer shall then announce the average score.
(10) In case of tie score, Kettei-sen is held. Court Judges decide without raising   Scoring Boards.

Exceptions:
A. Shu-shin or two or more Fuku-shin indicate heavy contact. Shu-shin must call Medical Judge and tournament Doctors, and then call Court Judges’ Meeting to decide penalty based on Medical Judge’s Report.
B. Scoring is based on Standards of Scoring.
C. Scoring Forms are used from Appendix

4. Delegation of Authority by the Chief Judge